Belem I am sure was once a separate village but now is a part of Lisbon, about 20 minutes by tram. A local website says that, “Historically the Belem district was where Lisbon's elite resided, to escape the poverty and depravity of the inner city.

Today it has a thriving artists community, a huge cathedral, some notable waterfront attractions and there are lots of cafes and restaurants. The Canadians we met on the train from Faro told us that the custard tarts, the Pastel de Nata from Pastéis de Belem, were “To die for”. We are not so sure about that. We found the tarts everyone raves about to be too rich and sweet for our taste.

The lines to get into the cathedral were daunting in the hot sun as we wandered down to the waterfront to have a look at the Discoveries Monument and the Torre de Belem. 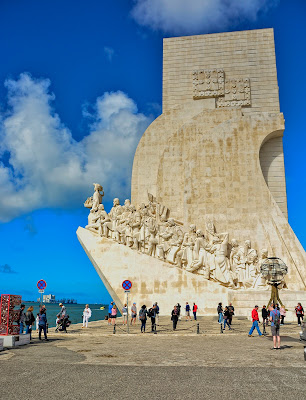 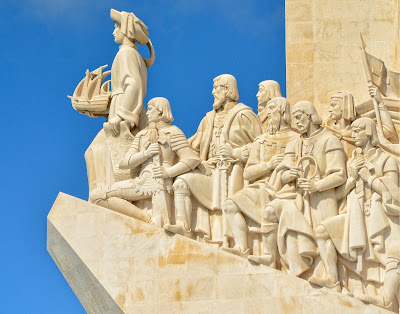 A couple of hundred metres further up the waterfront is the Torre de Belem. A defensive tower, originally built on a rock outcropping but the waves have taken their toll and now a small bridge is needed to gain access. It was constructed between 1514 and 1520.
Posted by .Gord Hunter at 2:50 AM