Grilled sardines seem like such a Portuguese thing. Shelley and I first had them grilled years ago in a small restaurant in Richmond B.C. They were great a but the next time we went the place was shutting its doors. It was their last night. Portuguese food just wasn't trendy enough.

So, the last day in Lisbon we decided to head over across the harbour to a small village to hunt out a restaurant that I had read somewhere had the best Portuguese sea food. 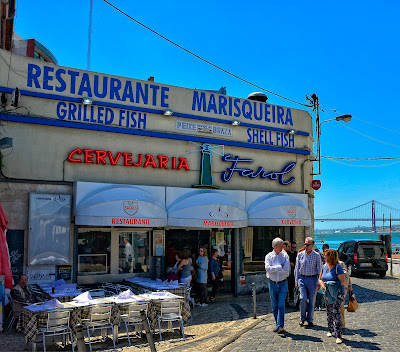 It was Sunday early afternoon, we took the ferry across with groups on family outings and of course tourists, We wandered around a bit then thought we should beat the rush. I think we were just in time. The place was filling up with large family groups out for Sunday lunch. Within 15 minutes of us getting a table the line for seating stretched well into the street.  I think we were the only not Portuguese in the place.

Most groups were ordering huge shellfish platters with shrimp, scampi and crab. Everyone had small ceramic hammers and it sounded like a construction zone with people using them to crack crab claws.

We had some prawns and salad and then both of us ordered grilled sardines. We each got five on a plate. They were each about eight inches long. Heads and all. The Portuguese don't do anything to them except to grill them with a little salt, olive oil and some lemon. They don't even clean them.

There is a bit of a trick to eating them. You put a knife in just behind the gill and draw it back and one side of the fish come right off. You then simply push away the, now cooked guts, and eat one side. Then take hold of the tail, pull up and the backbone and the head will come off in one piece and you can eat the other side.

What an experience. We almost felt like locals.
Posted by .Gord Hunter at 11:41 AM