The Quaint and Wonderful Yellow Tram 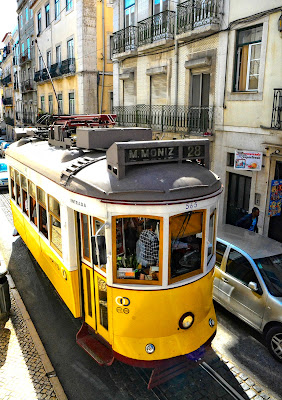 If this city has one thing, an iconic symbol is everywhere. One that says “Lisbon” it must be the
yellow tram.

Lisbon has a network of quaint, old-fashioned trams that lurch and screech around the narrow streets of the capital. Due to the undulating network of roads in the city, only the classic yellow vintage trams, which were originally commissioned in the 1930s, are able navigate the steep inclines or sharp twists of the tracks. The larger and longer modern trams in service in some parts of the city simply couldn’t cope. The old yellow trams would be in a museum in any other city but here they are an integral part of Lisbon public transport network.

Most tourist guides suggest that a ride on the number 28 tram is a highlight of any trip to Lisbon. As luck would have it the 28 goes right past our door. We are on the second floor and you could almost reach out and touch the passengers as they move up our narrow street.

From first thing until late tourists cram this route. for a cheap tour of the city. If you managed to grab a window seat, the Lisbon tram 28 will reward you with a fantastic tour of the city for just the price of a bus ticket.

A ride on the old tram is not necessarily a comfortable ride. The benches are made of wood. You would easily think that tram lines were laid as if part of a ride at a fair.

This morning we managed to squeeze on at the stop just a 100 metres down the street. I am still not sure how we managed. The sign on board says it can take 20 standing passengers and I counted at least 30. The tight turns and steep hills and jerky starts and stops made it a real adventure. At some point I was hanging on to a strap hanging from the ceiling, Shelley was hanging on to my belt with one hand and with the other was helping keep an American tourist from falling down
because if one of us went it would be like a game of dominoes, We’d all go down.

Getting off is a real challenge. The driver insists you have to get off from the rear of the tram so you have to struggle to the back of the tram as soon as you think your stop is approaching otherwise you will miss it. We were chatting to a couple next to us who said at some point "Our stop is next" We said Ours too time to make a move." and we struggled from the front, to the back door. We got off. They must have missed the stop. 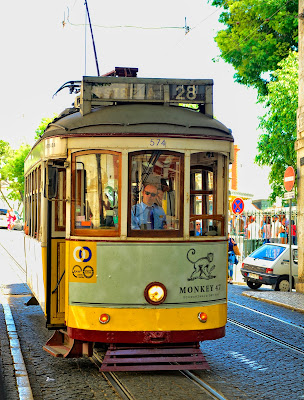 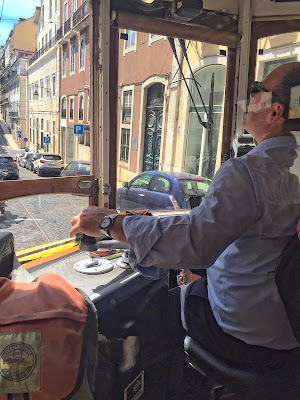 Then you have to hope the driver opens the door. When he doesn’t people yell, “Open the door. Open the door” until he does. Of course they do this for us in Portuguese because we still can’t get our heads around this language

Email ThisBlogThis!Share to TwitterShare to FacebookShare to Pinterest
Labels: Lisbon