A Where Bikes are King

Amsterdam is one of the best walking cities I have ever been to although it takes a bit to get used to.

Here bikes are King. The Amsterdam Guide says it best. "A typical Amsterdam street scene sees countless cyclists either heading to or from work, transporting young children to school, or carrying anything from groceries or house pets to impressively tricky objects like big suitcases, ladders or even bulky furniture. From students to police officers and from bank staff to couriers, everybody’s on a bike – cycling is the most egalitarian mode of transport in Amsterdam."

There are almost 800,000 bikes in Amsterdam so it is best to figure out right-of-ways quickly. Dutch cyclists seem to have an innate understanding about how the other cyclists are going to react to any given situation it is the pedestrians who screw it all up. Rule number one - figure it out quickly. If you see it nice foot path assume it is a bike path and look to the side for your own territory. You might be safe there.

There are bikes stands everywhere but the bike garage at Central Station takes the cake. 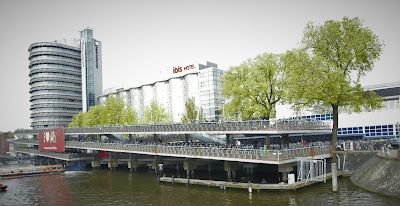 Three stories of bicycle parking and that is only a part of available bike parking at the station.

They are used for everything and just to get around.


Traditional Dutch bikes are black with a frame which we'd call a women's bike in North America. People paint their bikes in bright colours which makes them easier to identify since about 90,000 of them get stolen each year. 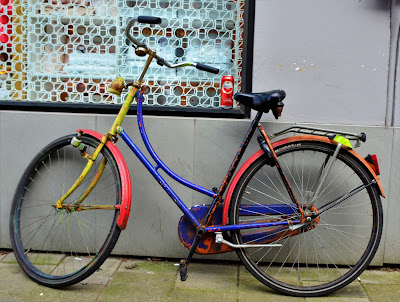 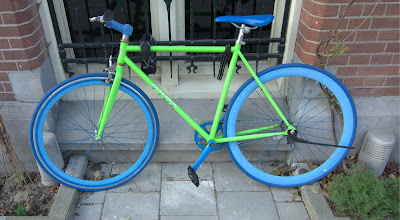 Email ThisBlogThis!Share to TwitterShare to FacebookShare to Pinterest
Labels: Amsterdam