I always thought that York Minster was the largest Gothic Cathedral in Europe but to my surprise, The Catedral de Sevilla takes the prize and they have the Guinness Word Book of Records Certificate to prove it. York Minster it seems is the largest in Northern Europe.

The lineup to get in around 11:00 stretched around the block and we just didn’t have the heart to stand that long so we walked down by the river, checked out the bus station and walked back into the old section for a great tapas lunch at Bar Baratillo. By far the best tapas and service we have had so far.
By the time we got back, the line had diminished to a much more reasonable 10 minutes.
When we got to the cashier I asked for one Adulto and one Pensionista. I couldn’t believe it - got ID’ed. I said, “Thank you”

The church, Santa Maria de la Sede, is huge, no doubt about it. Each pillar holding up the roof is gigantic. 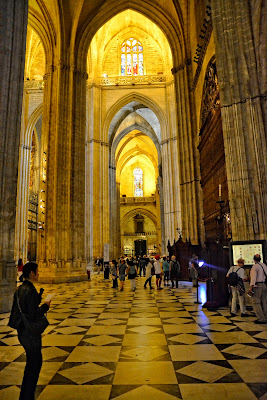 The cathedral's construction lasted over a century, from 1401 to 1506. It is said that when the plans were drawn up, church elders stated, “Let us build a church so beautiful and so magnificent that those who see it finished will think we are mad.

The cathedral occupies the site of the Aljama mosque, built in the late 12th century by the ruling Moorish dynasty. Very little remains of the original building. The bell tower which was formerly a minaret stands tall against the church is very impressive and the interior courtyard where in Moorish times, worshippers would wash their hands and feet in the fountains - under the orange trees - before their daily prayer sessions. 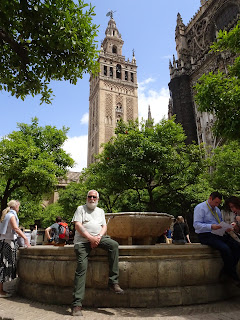 The church is dark and cool even under the hot Spanish sun and walking in it takes a few moments for your eyes to adjust to the light.

The tomb of Christopher Columbus is in the church, a favorite of visitors which makes it tough to get a clear photograph of it. Shelley did manage but as every one knows she has much more patience than me.

A am always put off by how much gold is in these churches and this one is not exception. Perhaps it takes the cake in that area. Huge gold statues, gold accoutrements of worship, gold facades – most of it behind huge, thick barred gates locked away from those who gave it to the church n the first place. Not that you could give the tourists free reign. They would have carted off the lot by now. 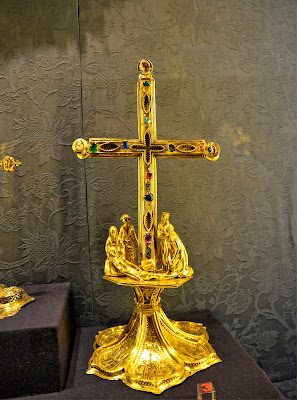 The church has its odd bits as well. Near what is called the lizard Gate a stuffed crocodile, known as El Lagarto,  hangs above the door.

The crocodile was a gift from the Sultan of Egypt to King Alfonso X, in his attempt to woo and marry the king's daughter Berenguela. He also sent an elephant and a tame giraffe along with the reptile.  In the end the Sultan was not able to convince the princess to marry him but apparently they got to keep the pets anyway. 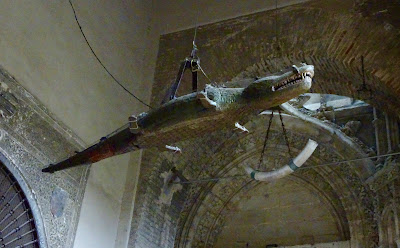 The crocodile, supposedly, eventually converted to Christianity after its long stay in Seville. When it died it was stuffed. Assumedly the elephant was just too big to stuff but they did save one tusk and when the giraffe eventually succumbed they saved the bit it wore and those items hang together with the crocodile as some of the more quirky relics in the church.

And as icing on the cake. Shelley found parrots nesting on the walls. 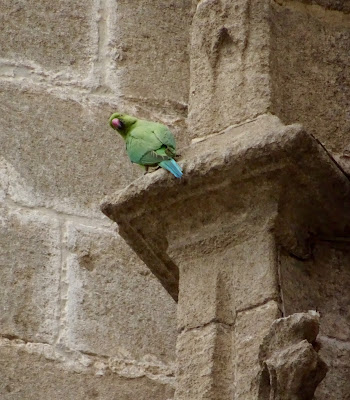