On to Spain Today

Bordeaux was our only intentional one night stay. We had breakfast and caught the tram back to the station then climbed on the Train to Hendaye. The town sits on the French side of the Bidasoa River which divides France from Spain on the west side.

To our surprize the train was almost full and it took a few minutes to extract the people who had claimed our good seats for their own, and we were on our way. 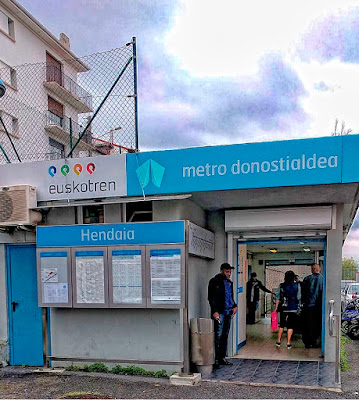 As we headed south I was surprised to see that the landscape changed as much as it did. We went from fertile farmland to what seemed like mostly scrub brush, pine and gorse bushes. As we neared Spain we moved closer to the ocean and we disembarked most passengers into good sized communities we had never heard of. Off to enjoy the long weekend by the sea I suppose.

We got to Hendaye at about 1:20 and had to figure out how to get onto the Euskotran, a commuter service to San Sebastian. The track for this Spanish train extends across a bridge and into France about 200 metres to a tine station.

The people who arrived ahead of us seemed immensely dismayed and we figured that the train wasn't running or catastrophe had struck. It turns out the theatrics were only because there was a one hour wait for the next train. No big deal for us. We are used to train station waits by now. These Spaniards tend to overreact a bit I guess.

We climbed aboard the El Topo or the mole in Spanish, so named because there are so many tunnels and the train spends to much of the trip underground.

Forty five minutes later we were in San Sebastian.

Half starved we grabbed a quick bite and a beer then waited for our Pension to open their front desk and we settle in.

We are still dragging this cold around and the night was cool so we decided there was more to be gained by staying in, staying warm and getting a good night's sleep.