Not Quite the Lunch We Expected 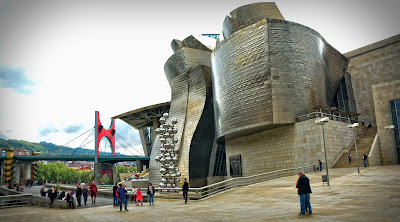 After working our way through the museum we were ready for lunch. We looked at what was offered at the museum and had to decide, should we eat at the Bistro, the Bar or at the Nerue Restaurant. We thought since we didn't  really want bar food we would try Nerue which seemed by the notice to be a bit more upscale.

We walked around to the entrance and as we started up the stairs noticed the menu but we thought what the hell, it should be good. When we got to the top there was just a plain door, no sign, nothing so we tentatively opened the door.  As we stepped in the first thing we saw was the open kitchen and the whole kitchen staff  said "Ola".

A very dapper guy appeared and said yes he had a table for us and would we like a tour of the kitchen. "Sure" we said. He introduced us to the sous-chef who explained that the restaurant relied on foods produced in the Bay of Biscay area and while explaining the restaurant's goals and the foods they strive to produce. As he talked he presented us with first s chickpea broth with a curry foam, then a small croquette with three peas inside as he explained that these peas are only available for a two month period in the spring. After a few more gastronomic treats he lead us inside the restaurant and one of the other staff sat us down.

I said to Shelley, "This is going to cost us."

There were some a la carte items luckily enough which we ordered but the most intriguing thing were the set price meals. They were designed as a very long meal with several small plate courses with wine pairings of course for a bit extra. For example, the menu with 14 items, which cost 170 Euros consisted of:

The wine pairing was an additional 65 Euros.

Shelley had the Artichokes with marrow, lentil and mushroom soup and I had a rack of lamb. They were both very good. The artichokes in Shelley's soup were no bigger that the end of my little finger. It must be tough to convince a farmer to harvest them so small. We were offered little appetizers throughout - a spinach leaf with cauliflower puree and olive oil for example

A mother and her daughter next to us had at the very least the 14 item lunch. Small plate after small plates. It just kept coming. There was a guy eating by himself who must have had nine different wines he was drinking, never finishing one glass completely.

The service was impeccable. If there were two people at the table both their plates had to arrive at the same time carried by two different waiters. If you stood up to go to the washroom someone escorted you to an unmarked door, opened it and let you in. The washroom had toothbrushes available if you felt the need but with all that, Shelley noted the liquid soap dispenser was empty.

In the end it didn't cost us an arm and a leg and when we opened the door to leave the kitchen in unison bid is goodbye. We waved bye to them too.

It was fun in the end. They treated us with the same kind of detachment they treated everyone with.

Back at the bnb we looked the place up on line. They have one Michelin star.

Next time you are in Bilbao check them out - Nerue Guggenheim Bilbao.

Email ThisBlogThis!Share to TwitterShare to FacebookShare to Pinterest
Labels: Bilbao