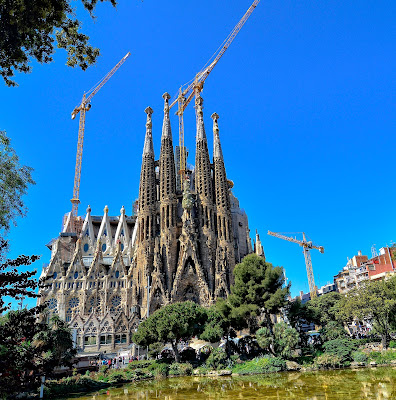 What most of us don't know is that Gaudi didn't start as the lead architect on this church when the original construction was started in 1882. The first design was a much smaller church built in a much more traditional style. Some progress was made but by the time the crypt was built the original architect, Francisco Del Vilar, quit.

Antoni Gaudi was hired to replace him. He brought a whole new vision to the project. He was 38 years old. In the years following, until Gaudi was hit by a tram and killed in 1926 at the age of 74, the church became the main focus of his life's work,

We took the Metro and coming out from the underground you see no sign of the structure until you turn and face behind you and there it is it all it's glory. No matter how many photographs you might have seen nothing compares with the real thing.

We had bought tickets on-line but had to wait for out appointed time to get in. That gave us an hour to
poke around before out guided tour.  The interior of the church is pretty much complete with one entrance yet to be finished.  What you come to see is magnificent stained glass reaching high into the building and massive columns built on a slight angle and branching out at the top like trees.

The work was so massive that Guidi knew he would never finish the work in his lifetime but before he died he did finish about 15% of the project. He also trained the architects who would take over from him when he did pass on to they could continue his work.

Unfortunately the Spanish Civil War intervened followed by the Second World War. The church was bombed and many of the models and the plans of the project were destroyed. Then with the economic down turn after the wars it to some time before models could be rebuilt plans redrawn and the project restarted. The first task was to repair the damaged sections then start anew with the goal of completing the church.

The work goes on and we were told by our guide that the whole project will be completed by 2026 and that we should all come back to see it then.

Some of the most interesting detail in the church is in the facade. The figures tell the story of Christ, his birth, life and ascension. Guidi was an architect not a sculptor so his plans did not show what he expected. He left that to the people he hired to carve the works.

Etsuro  Sotoo, a Japanese sculptor, high influenced by Gaudi was brought on board to build the facade and other aspects of the external design. He worked on the project for 40 years. Our guide pointed out that several of what appear to be angels have Asian features.

The newest was produced by Josep Maria Subirachs did all the carved figures on the opposite side of
the church in quite a different style. They are powerful figures and for some, still controversial.

In the next few years the eight spires we are familiar will be joined by 10 more. When La Sagrada Familia is completed, it will have 18 towers. 12 of the towers will represent the apostles, four of them will represent the evangelists, one will be designated for the Virgin Mary, and of course the last one, the highest one in the middle, will represent Jesus Christ. That tower will be 170 metres tall, one metre less that Montjuic, Barcelona's highest point of land.

The guided tour was great. The guide, an art historian gave us lots of insights into the why certain things were added to the design and what to expect in 2026. Like he said, "You have to come back in 2026 and see it completed"
Posted by .Gord Hunter at 8:13 AM