This week we have been staying in Seville's old town in the Santa Cruz. It is the old Jewish Quarter. Some of the churches were once synagogues. After Ferdinand III conquered the city from Muslim rule, he turned is attention to the city's Jewish population. In 1492 all jews were expelled from Spain,

The Barrio de Santa Cruz is a labyrinth of cobbled streets and alleyways so narrow that two people can't walk side by side. The narrow streets provided shade and protection from the oppressive summer sun. There are centuries old gardens inside the walls of the Real Alcázar and around them. Walking the streets we can peek in and see lush courtyards through doorways and there are scores of small squares lined with tapas bars. 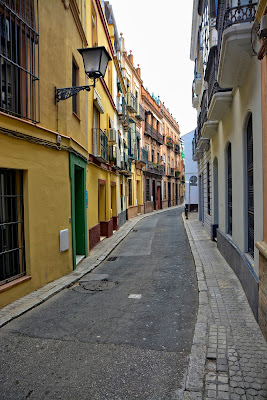 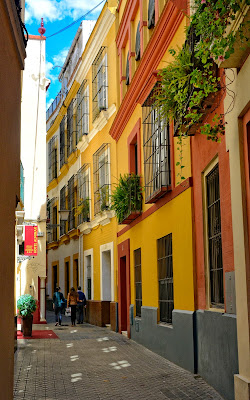 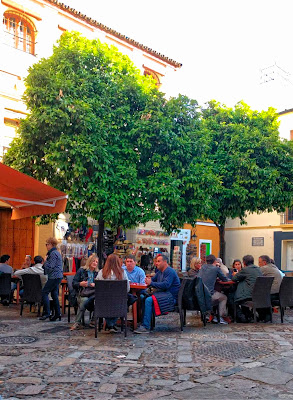 The Callejon del Agua, a narrow, laneway follows the Alcázar garden walls and is named after a watercourse which ran along the top of the wall and brought water to the palace grounds.. At the end of it is Plaza Alfaro which they claim was the inspiration for the balcony scene in Romeo and Juliet. 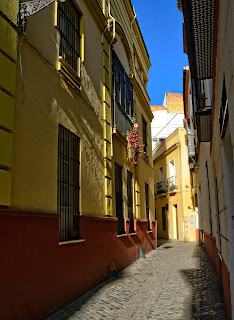 Our street, although it is wide enough for a car, you have to look before stepping on to the street because if you step out and one is coming it could be game over. It has a sharp turn a few door down from us that narrows the street to 1.7 metres wide.

There is evidence of the Roman occupation everywhere. Three stone Roman columns from Hadrian;s time still stand in a courtyard not much more than a stone's throw from where we are staying. There are ruins dating back to Julius Caesar. It is against the law to disturb these artifacts so old millstones and bits of Roman columns are integrated into structures built much later. 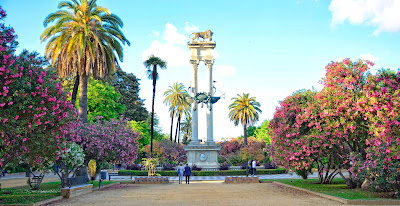 Walk out of the maze of streets to what was originally an orange grove for the  Alcázar, the Jardines de Murilllo, with its bougainvillea, palms, orange trees parrots and a large monument honouring Christopher Columbus.