We are sure Glad this Town is on our List

I guess you can call it San Sebastian or Donostia. It means the same thing, the first in Spanish the second in Basque. What ever you decide on, it is a beautiful City. We are so happy it ended up on our list of places to visit probably because I couldn't figure out how to get from Bordeaux to Bilbao on the Easter weekend. Not so tough now we are here but online was another thing.

It is right on the ocean with a small protected harbour  and three beaches. One is more exposed to the Bay of Biscay that one the surfers love and the others seem to be for swimmers and sun worshipers.

With the small protected harbour it was probably a fishing village, the old Pescateria still stands downtown but the idea of using the city as a vacation destination began some years ago,

The Spanish Royal Family used the city as a summer residence in the 1800's and the early 1900's. It was the place to be for several years and arguably still is.

It has three restaurants with three Michelin stars and lots and lots of Pintxo Bars. Pintxos are kind of a Basque version of Tapas.

We walked down along the river this morning watching the rowers and marvelling at the bridges.

Along the river walk we could look down and see the fish feeding as the tide subsided. We couldn't figure out what kind of fish they were but, they were as long as 24 inches and their scales would flash in the light as they poked around the rocks to see what they could find to eat.

We wandered on to the most unprotected beach to watch the surfers for a while then moved on to the old town. It was a great morning, overcast but not to cold and with a refreshing breeze off the Atlantic.

There were lots of people on the street.

We came across a small open square with a wonderful old bandstand. As we got there a couple of people were spreading out a small tarp in the middle of the square and as we strolled around music started to play and spontaneously about four people started to dance in a line, in step to a song and a dance they obviously all knew. In a very short time more and more local people joined them until eventually they formed a circle around the square. Everyone seemed to know the steps and the routine to every song In no time more people joined until there was a second circle of dancers inside the first one then a third. People would take their jackets or sweaters and place them on the tarp to protect them from the dust and just step into a circle and begin to dance.

Everyone knew the songs and the dance steps. It was quite magical and we wondered if they all do the dance every sunday. 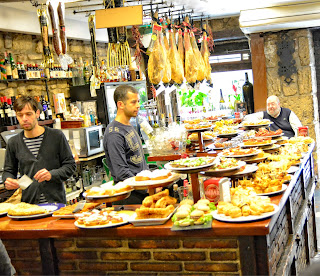 Around noon the pintxo bars opened up. Unclear about the process one is supposed to use when ordering pintxos we were a little reluctant to jump in but hunger got the best of us and while Shelley found a table I got a plate and filled it up with the small snacks, octopus, chicken, serrano ham, chorizo, shrimp and mushroom, cheese and anchovies and tomato, a shrimp mousse and of course topped the order with a couple of beer.

After all the pretension of French food and Paris waiters trying to guilt you into ordering the 35 Euro meal you didn't want it was so refreshing. I could get used to eating in Spain in no time flat.

After lunch and a walk around the point of land jutting into the ocean  we walked back by the harbour then we decided our Spanish integration would not be complete with a siesta.