Rather that complicate things too much we would keep it simple by walking down to the Musee d'Orsay and stroll on to the Eiffel Tower and figured we would plan to grab the Metro back. 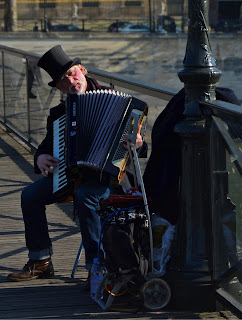 We walked along the Left Bank of the Seine crossing the Pont des Arts which leads right into the Louvre.  It was a great bright sunny morning and in the middle of the bridge sat an old busker in a top hat playing old French ballads on his accordion. It was perfect.

We wandered on down the river to Pont Royal, crossed the river again and into the Museum.

La Musee d'Orsay used to be a train station but when the lines were abandoned it was turned into a museum.The original building was begun in the spring of 1898, and opened in July 1900. Because of the station’s proximity to the Louvre and the Tuileries, the metal structure of the station was completely concealed by an exterior envelope of limestone in order to preserve the architectural harmony of the neighbourhood. It is a magnificent building built with eye incredible eye to detail. 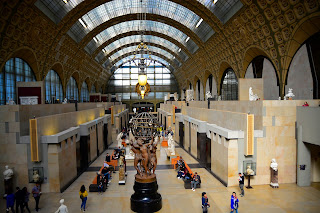 In the 1980' after sitting idle for a time it was converted into an Art Gallery. It is Internationally known for its collection of Impressionist Art.

We had a quick baguette, a quiche and a beer on a restaurant in a boat tied along side by the Pont Alexandre III. It is described in one of the guides as  "Paris’s most elegant, grandiose, and sumptuous bridge: one of the most beautiful river crossings in the world. It is quite spectacular with gold statues at each end."

We approached the Eiffel Tower from the south through the Champs de Mars which we think is the best approach. 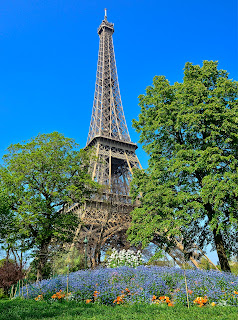 Everyone understands that the tower is an imposing structure but until you stand beneath it and look at the base it is difficult to comprehend how big. It is huge.

We wandered around for a while taking it all in.

We grabbed the Metro back and  even though I was annoyed paying 9.10 Euros for a tall Heineken at the sidewalk cafe outside our hotel it has been a good day.
We have a reservation at Chez Rene, a small bistro down the block for supper.
Posted by .Gord Hunter at 9:17 AM

Email ThisBlogThis!Share to TwitterShare to FacebookShare to Pinterest
Labels: Paris