We got a good start and caught the bus to the Gare de Lyon and headed inside to figure out yet another train system. We were doing fairly well when a SNCF guy arrived to help. He answered a few questions and congratulated Shelley on her French. He said he spoke a little English, kind of the equivalent to my French. I told him I spoke bar and restaurant French he agreed, and laughed.

There was ap problem with our train and a herd of us hung around the departure screens waiting for the track to be announced. They kept delaying until finally they announced track "E" and we were on our way. We had 1st class seats on the second level of a double decker TGV. (Train Grand Vitesse)

We pulled out of Paris 50 minutes late which meant out connection in Montpellier was not going to work.

We went from Paris in the north to Montpellier in the south in three and a half hours. I can report that the 1917 grape crop seems to be off to a good start, We saw so many vineyards.

Montpelier was confusing. We thought we would need new tickets but the train people just said, "Get on the train to Narbonne then grab the first train to Carcassonne from there." It turned out to be simple and we got to Carcassonne about an hour late which is pretty good considering the extra train connection and the late departure from Paris.

On the way the Mediterranean was to the south of us although we didn't see much of it but we could smell the salt air.  We past  Béziers where the brutal massacre against the Cathars took place.

We are staying at Le Dongon Hotel right within the walls. We were lucky enough to get upgraded to a larger room about twice the size of our Paris room. It even has a bath.

We are tired and not ready to spend a bundle on a big meal to we walked around for a while and stopped off at one of the sidewalk cafes for a glass of wine. The waiter promptly short changed me but was full of "Oh, Je suis désolé monsieur" We only stayed for the one glass.

Interesting that here the south of France, close to the Spanish border the way it is spoken is very much influenced by Catalan and Spanish. In other words, I have a hard time understanding them and they me. 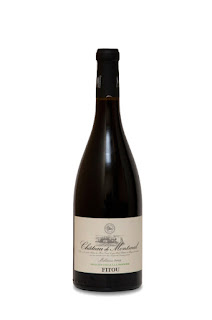 We decided on a small Italian restaurant that had a walled garden in the back with wisteria growing up providing o cover. It was a beautifully warm night. 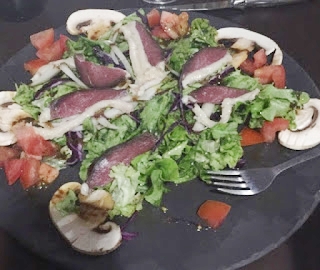 We had a Regina Pizza and a salade Magret de Canard. 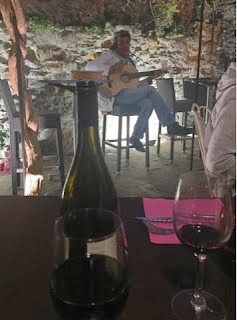 The restaurant had a singer/guitarist who sang a song for each table. Mostly old classics. He caught Shelley's eye and sang "Besame Mucho" All very romantic.


We walked back through the narrow streets under a full moon. Very cool.