Time to Move On

Moving day is always a bit of a test. 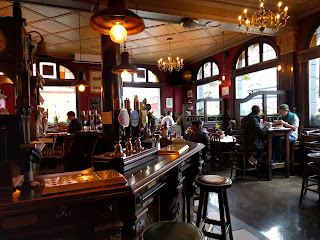 We had breakfast in a local pub then left the Hotel George about 11:00 and headed up and around on
the Underground, the Circle Line to be precise, to Liverpool Station where we had to catch our train at 7:32 so lots of time to kill. We checked out bags for the day and wandered off to Spittlefield Market.

I could have spend a lot of money there if we had any extra room in our bags. Neat stuff. Some very cool t-shirts. On Saturday there was a whole section dedicated to vinyl and small booths rented by scores of craft brewers. My favorite name brew name was Tea and Biscus.

We set off lunch determined to find Pitt Cue a restaurant I had seen featured on a cooking show. It was tough to find, even GPS was spotty. After wandering the streets we did finally track it down and it was closed for lunch Saturdays.

We wandered down by the Tower of London for a while then sat out the rest of our wait at the station.  There in London they don't actually post the platform from where the train is leving until shortly before the train leave so everyone stands watching the large departure board then - scramble. The train pulled out on time at off we were to Harwich, about an hour and a half's ride then onto the ferry.

The Stena Line ferry from Harwich to the Hook of Holland is the most direct route to Holland from the south of England. We were on one of the two new Superferries the Stena Hollandica. 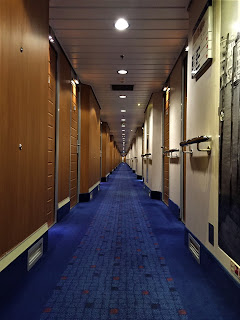 We were amazed. It was huge. Our cabin was on deck 11. Our "porthole was about 4 feet wide.  It had several restaurants and lounges. Very new and shiney.  When we sailed at 11 we didn't even feel the ship move nor did we feel and roll or pitch in the night.
Posted by .Gord Hunter at 8:23 AM

Email ThisBlogThis!Share to TwitterShare to FacebookShare to Pinterest
Labels: London