How Did the Place Get Its Name - Or not. 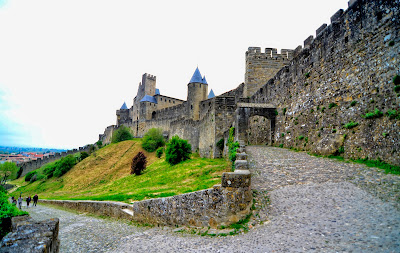 The site of the UNESCO Heritage walled city has been occupied as some sort of fortification or another since the 5th century B.C. Throughout history, one group after another built fortifications on this strategic hill Overlooking the Pyrenees to the south and down the Aude Valley to the north and east. In years past the Spanish border closer than it is now and not not very far down the road. Even now it isn't much more that 100 km.

The first story I heard about how Carcassonne was named is probably not true at all but in keeping with the philosophy that one should never let the facts get in the way of a good story...here goes.

In the 8th century, there were wars between Christians and the Moors in the southwest of Europe. At that point in time, Carcassonne was under Moorish rule. As the story goes, Charlemagne's army was at the gates of the city and laid siege to it in an effort to take the city back for the French.

The ruler lead a small raiding party out to attack Charlemagne's troops. After all that is what leadership is all about, isn't it? Unfortunately, he was killed almost immediately..

Upon his death, his wife named Carcas assumed the the position as leader over what remained of the Knights of in City.

She manned the ramparts with what was left of her army, the elderly, children and built straw figures to make it seem they had a significant force within.The siege lasted for some extended period. As food and water were running out. Carcas made an inventory of all remaining reserves. Things were desperate. She ordered the villagers to round up a pig and a sack of wheat. She force fed the pig until couldn't eat nay more. She then threw it off the highest tower of the city walls. The pig burst when it landed.

Seeing that, Charlemagne is said to have felt it was useless to continue and lifted the siege, believing that the city had enough food to the point of wasting pigs fed with wheat.

As Charlemagne's army broke the siege and moved off, Overjoyed by the success of her plan, Lady Carcas decided to sound all the bells in the city. One of Charlemagne's men is said to have exclaimed: "Carcas sonne!" (which means “Carcas sounds”). Hence the name of the city.

Carcas appears to be a fictional character however. The story dates back to oral traditions of the 12th
century and was written down in the 16th century. In fact, Charlemagne could not have besieged Carcassonne, as his father Pepin had already taken the city from the Saracens in 759 - Charlemagne would have only been 17 at the time.

Never the less at the Porte Narbonnaise by the drawbridge, a replica of her bust welcomes visitors. The original well weathered and dating from the 16th century is preserved in the castle.
Posted by .Gord Hunter at 8:00 AM

Email ThisBlogThis!Share to TwitterShare to FacebookShare to Pinterest
Labels: Carcassonne