We Can't Leave Without Talking About the Canals 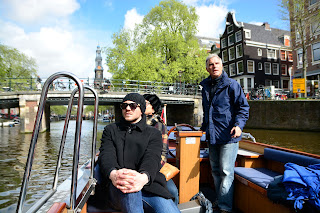 Anyone spending much more than a day or two in Amsterdam realy should take a canal cruise of one sort or another. The options are plentiful. There are tour boats like long aquatic buses, dinner cruises and party cruise  boats carrying 60 or 70 people and small open boat cruises that carry 4 to 6.  Some will even provide a picnic and a few drinks.

Being crammed into an aquabus didn’t appeal to us so we found a company offering small open boat cruises. There were 8 of us and the captain. It was very personal. The skipper took the time to explain 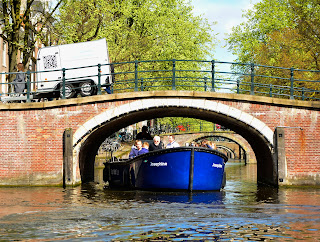 the architecture, the canal system and a smattering of Dutch history as we slowly motored up one canal and down another. It gives you a much different perspective and I confess to being lost most of the time. The whole thing takes about ¾ of an hour.

The small boat gives the captain more flexibility about which route to take. Some of the bridges are so low that even sitting down we had to duck.


Amsterdam was a very rich trading city. The way
our guide explained it, while the Spanish were out there spreading their version of the “Word of God” , The Dutch were focusing on making money.  Lots of money.

The canal system allowed the traders to unload their ships onto canal barges and bring the goods right up to the warehouse doors which were often beside the trader’s home or perhaps on the top two or three floors. The old warehouses have now been converted to condos.

Email ThisBlogThis!Share to TwitterShare to FacebookShare to Pinterest
Labels: Amsterdam