It was laundry day this morning. I was up early and the first one into the Laundromat. (A stone’s through from the hotel) It took me a bit of time to sort out the instructions in French but I stumbled through. In between the wash and dry I grabbed a Café Americano and a chocolate croissant for Shelley and by the time we were ready to face the day I was done. 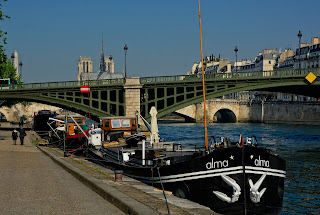 We walked East down the Seine and once we were out of the Zone Touristic it was pretty much just us and the locals. We wandered through Les Jardin des Plantes an impressive botanical garden started four centuries ago. We then walked back via the Sorbonne  and finally we had lunch at a small café by  small Saturday market.

It is going to be a relatively hot day – 22 degrees. We just had to drop into the Shakespeare and Company bookstore. It is worth noting that the store is not the original Left Bank bookstore opened by Sylvia Beach  and is not is the spot where notables like Earnest Hemingway, F Scott Fitzgerald, Ezra Pound and Gertrude Stein hung out.

This store was started in 1951 by an American – George Whitman and was originally called  Le Mistral. Before she died, one evening having dinner with Whitman, Beach announced that she would give Whitman the name to use if he so chose so, on the 400th anniversary of Shakespeare’s  birth the shop was renamed Shakespeare and Company.
The shop has beds tucked among the shelves of books where aspiring writers are invited to sleep for free in exchange for helping around the bookshop and agreeing to read a book a day and to write a one-page autobiography for the shop's archives. These guests are called "Tumbleweeds," Whitman called the store a “socialist utopia masquerading as a bookstore"
Posted by .Gord Hunter at 6:27 AM

Email ThisBlogThis!Share to TwitterShare to FacebookShare to Pinterest
Labels: Paris