Out And About in Barcelona

We are still slowed down quite a bit with this damn cold we picked up in Paris so we don't have as much energy as we'd like but we are dealing with it. Cooking suppers at the BnB instead of going out. Trying to get past it.

We are figuring out the Barcelona Metro which has been working well for us and we headed down to
Las Ramblas to check out Marcado de la Boqueria. In a funny sort of way, Las Ramblas reminded us of the Champs d'Elysee. Full of people who aren't really there to shop but because that is where a lot of people go. It was certainly crowded.I can't imagine what it is like in the summer.

The market is quite amazing. The seafood alone would send most cooks into overload. But, there are so many cheeses, bundles of rosemary you could hardly get your hand around, amazing selection of meats, herbs and flavoured salts, honey, fresh young artichokes and anything else you might want to whip up a good meal. There are also an awful lot of tourists.Like many of those markets it must be frustrating to have so many people passing through, doing selfies but not buying, just crowding up the aisles.

We wandered off down some of the side streets and finally settled for so mediocre tapas and a beer, just to have a break.

In the front of  the Catedral de Barcelona, in Placita de la Seu was pretty lively with everyone crowding to get their picture taken by the Barcelona sign. The line up for the Cathedral was quite long and we gave it a pass and headed into the Gothic Quarter. On a small street beside the cathedral there was a small entrance to the Cathedral with no one in line at all. We paid our 7 Euros and walked right in.

At first we weren't sure of were were just gaining entry to the Chapter House or a smaller church to the side of the cathedral. We were quite taken in by the cloister, an open courtyard with small chapels all around. There is lush greenery and a pond with a fountain in the cloister. It is home to 13 white geese representing the age of Saint Eulalia when she was martyred.The cathedral's website describes it this way

The Cloister is rectangular and made up of four galleries with ogive arches separated by pillars. The reliefs sculpted into the pillars of the Cloister’s arches show scenes from the Old Testament and from a legend about the Holy Cross, and the keystones of the vault depict scenes from the New Testament.

The chapels arranged along its three galleries were each initially dedicated to the patron saint of an institution or guild, or were placed under the protection of a specific family. All these chapels are covered by groin vaults, most of which are quadripartite, with keystones situated at the point where the nerves meet.

In the center of the Cloister is a garden with palm trees, magnolias, an orange tree and a fountain dating from the mid-15th century, where the traditional “ou com balla” (the dancing egg) takes place each year for the celebration of Corpus Christi. There is also a large pond in the Cloister which is home for the 13 white geese of the Cathedral.

I couldn't have described it better myself. Let me know if you figure out what it all means,

There is a chapel dedicated to the more than 3000 clergy killed during the Franco era as well.

At some point we rounded a corner and found ourselves in the Main Cathedral. The architecture of these massive old churched always amazes me. Particularly when you thing about how they managed to do this is 1390. Mind you they didn't finish it for 200 years. That is a long term project. 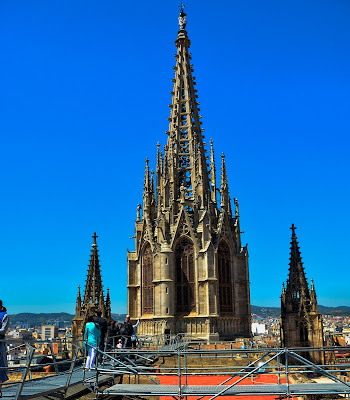 Over to one side we came across a small line and discovered that there was an elevator to the roof
where they were doing some work. Eight at a time we went up and walked along the catwalks and took in a great view of the city. We could see The cruise ships in the harbour, the Sagrada Familia,the ever present courtyards in Barcelona homes and the fort up on Montjuic, sort of menacing, overlooking the city with it's own dark past.


In one of the small squares in the Gothic Quarter seemed to be a place where those with a message to share hung out. There was someone with graphic pictures dead animals, people handing out leaflets and this guy with this curious hat wanting to tell us how build an "evolutionary social economy."